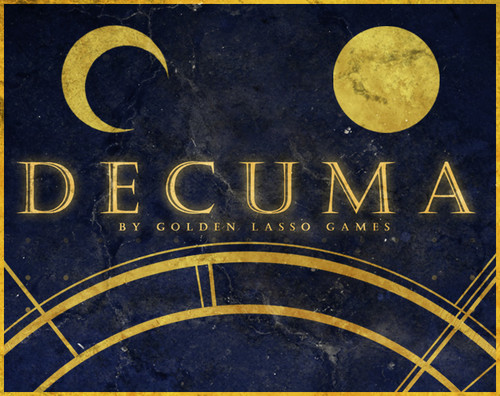 In Roman mythology, Decuma is the Fate tasked with allotting a mortal’s thread of life. Decuma the game is a tool that facilitates collaborative world-building and character connections using tarot cards. It is effectively a game-before-the-game and gives your PCs the threads of life that you can weave into your long-term campaign! Decuma works for any setting and with any RPG system, from D&D or Savage Worlds to PBTA and FATE!

The version of Decuma on itch.io is a free beta. We will update the betas on this site as they are released.

Character Connections
Players come to the table with basic character concepts, but by using Decuma they create backstory and connections with one another that enrich the story. It gives the players and the GM lots of story elements to work with so no more meeting in a tavern!

Location Building
Decuma facilitates collaborative world building for any setting! Whether you need a fantasy village, a generation ship in space or a neighborhood in an urban city, this game can make it! By the end of your session you will have a map to reference during your campaign, as well as NPCs the party can interact with and cultural elements, such as slang or philosophical beliefs. Best of all, the players know the location as well as the GM so lots of game time is saved asking basic questions!

Group Dynamics
Your PCs shouldn’t just have history with each other! They have been interacting with the rest of the world too! Who are the party’s allies? What do they believe in? What big event made them famous or infamous? Building another layer on the location and character connections that Decuma builds, they players also gets to build a collective history that will impact how they interact with the game world as a collective!

Decuma gives GMs and players all the tools they need to start a campaign in a unique world that is tailored to their party!

We are currently play testing with a kickstarter planned for late 2019. Join our mailing list for updates at goldenlassogames.com!

Get Decuma: the R&D for your RPG

Decuma: the R&D for your RPG

A tarot-based worldbuilding game that creates maps & narrative details for campaigns in any TTRPG system.