Decuma: The R&D for your RPG

Included in this purchase:

Decuma is “the R&D for your RPG”: a tarot-inspired card game that helps the GM and their players collaboratively create all the important details for their campaign, including key locations, character connections, NPCs and setting conflicts. Plus, Decuma can be paired with any tabletop RPG setting or system, including D&D, Savage Worlds, Powered by the Apocalypse, Pathfinder, and more—so you never have to worry about compatibility.

Decuma uses a unique set of questions that facilitate collaborative world-building. It saves the GM a ton of prep time and dramatically increases player buy-in for an RPG. Decuma can be easily customized to focus on (or exclude) specific aspects of campaign creation. You can use it to add depth to a pre-written adventure or to create a home-brewed world from scratch!

Decuma splits the tarot deck into three parts, and each part creates a different aspect of your campaign:

Character Connections: Suits of Wands & Cups Players come to the table with basic character concepts, but by using Decuma they create backstory and connections with one another that enrich the story. It gives the players and the GM lots of story elements to work with so no more strangers meeting in a tavern!

Location Building:  Suits of Coins & Swords Decuma facilitates collaborative world building for any setting! Whether you need a fantasy village, a generation ship in space or a neighborhood in an urban city, this game can make it! By the end of your session you will have a map to reference during your campaign, NPCs the party can interact with, and cultural elements, such as slang terms or philosophical beliefs. Best of all, the players know the location as well as the GM so lots of explanation time is saved later!

World Dynamics: The Major Arcana Your PCs shouldn’t just have history with each other! They have been interacting with the rest of the world too! Who are the party’s allies? What do they believe in? What big event made them famous or infamous? Building another layer on the location and character connections, they players also gets to build a collective history that will impact how they interact with the game world as a party!

Decuma can be easily customized to fit your needs just by including or excluding cards!

Running a pre-written D&D adventure in Waterdeep? You already have a location! Leave out the star cards and just build character connections and world dynamics!

Playing a PBTA game like Masks or Demigods that has built in character connection mechanics? Just play with the star and moon cards to build your location and your world dynamics

In order to download this game you must purchase it at or above the minimum price of $13 USD. You will get access to the following files:

A great Kickstarter and a great game.

I love worldbuilding, session zero games! Now I need to get a tarot deck. 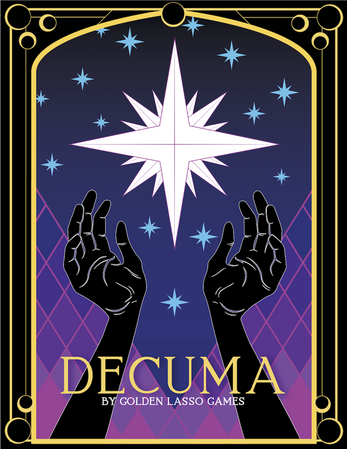